post-title portfolio-title Bolsena and its neighborhood 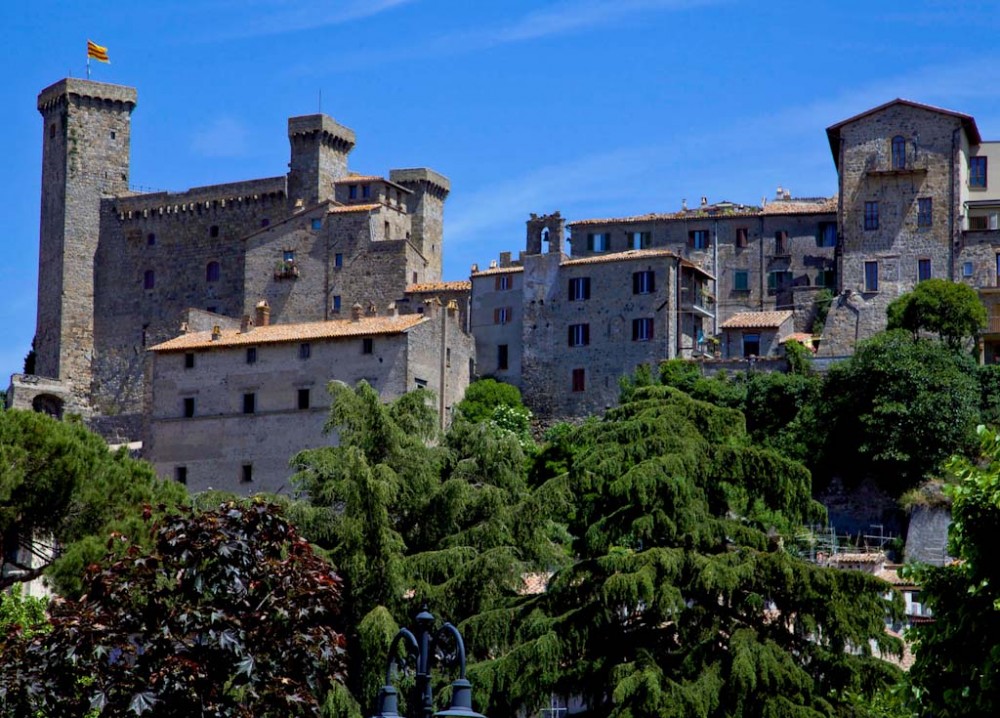 The mild micro- climate of the Lake, featuring warmer winters and less sweltering summers compared to the hinterland, have always favoured the human settlement, thus resulting in the creation of several villages on the coasts of the Lake. 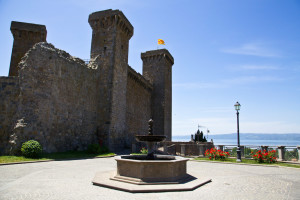 First of all the village the Lake is named after: Bolsena
The town centre conserves vestiges of its Etruscan – Roman past, such as the urban walls and the Anfiteatro del Mercatello, and has kept its structure intact throughout the centuries, now looking as it did during the Middle Ages. From Santa Christina’s Church you can have access to the underneath Catacombs, a typical example of early-Christian underground building showing Medieval renovations and conserving fine masterpieces by local Renaissance painters. Inside Rocca Monaldeschi della Cervara, you can visit the “Museo Territoriale del Lago di Bolsena”, where you can get an overview of the history of the place from its geological origins to the Etruscan- Roman and Medieval times up to the recent developments of local culture. On the nearby hills woods of oaks, chestnut trees and hornbeams work as the backdrop of Etruscan necropolises. On the coasts of the Lake there are many restaurants where you can have typical dishes and wines. 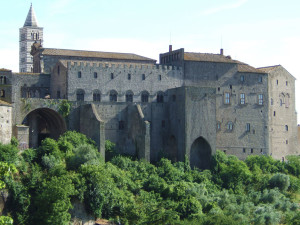 Viterbo
From the Lake it is easy to reach Viterbo, the main administrative centre of the area. Romans have turned the original Etruscan village in a military settlement, a peculiarity which would be strengthened during the early Middle Ages through the building of massive walls. Considered as impregnable for having defeated Frederick Barbarossa in 1263, Viterbo was chosen as Headquarters of the Pope between 1257 and 1281. Indeed the making of the Palace of the Popes with its Loggia and its Palace of Conclave dates back to that time. Another proof of the glorious Medieval past of Viterbo is its town centre with its narrow streets, its Romanic and Romanic-Gothic churches and San Pellegrino district, whose appearance has almost unchanged since. Not to be missed the Etruscan National Museum inside the Albornoz Castle, where you can see the Chariot from Ischia di Castro, a stunning bronze parade float dating back to the 4th century BC. Particularly impressive is the carrying of Saint Rosa’s Float, which happens on September 3rd, Saint Rosa’s Day. 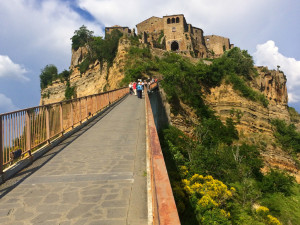 Civita di Bagnoregio
Not far away from Viterbo lies Civita di Bagnoregio, defined as “The Dying Village” by Bonaventura Tecchi, a writer born in the village. Civita, a suburb of the Municipality of Bagnoregio, lies on the top of a clayish hill affected by a phenomenon of erosion which is responsible for its isolation. From Civita, reachable only on walk by means of a hanging bridge made of concrete, you can admire the impressive underneath valley, made of badlands stemming from an extensive erosion of clayish soils by wind and water. 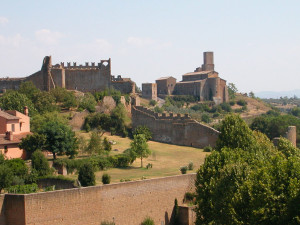 Tuscania
On a tuff hill dominating the strategic valley created by the rivers Capecchio and Marta, an emissary of Bolsena Lake, lies the village of Tuscania. Important town of the Etruscan realm of Tarquinia, Tuscania conserved its importance after it was taken over by Romans, who built Via Clodia. Archeologists discovered several Etruscan necropolises, particularly interesting from the viewpoint of the variety of hosted tombs. The items found in the tombs are enshrined in the Museo Archeologico Nazionale Tuscanese. The interesting archaeological site of Tuscania lies in a stunning farming area stretching for over 2000 hectares rich in olive trees, which in 1997 was recognized as “Natural Reserve of Tuscania”.
The full immersion in the nature is also guaranteed by a walk on the ancient stretches of Via Clodia going through Tuscania and connecting it to the villages in the surroundings. 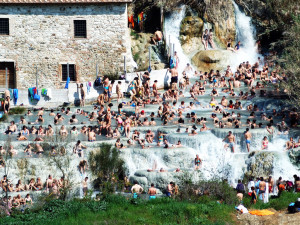 Saturnia
The path of Via Clodia leads us from Tarquinia to Saturnia, a suburb of the Municipality of Manciano (Gr), known for its spas. In the area there are indeed thermal springs whose sulfurous waters pour at a temperature of 37.5° C and have well-known therapeutic properties, giving immediate rest and wellness to the bathers. The main thermal waterfalls are Mulino Waterfalls, located on an ancient mill, and Gorello Waterfalls. 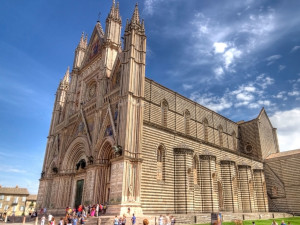 Orvieto
In the Umbria region lies Orvieto. Lying on a huge tuff cliff dominating the underneath valley, it conserves paramount examples of civil and religious architecture dating back to the Middle Ages and the Renaissance, such as the stunning Gothic Cathedral built by Lorenzo Maitani, an architect belonging to the School of Siena, San Brizio’s Chapel with a famous cycle of frescoes about the Last Judgement by Luca Signorelli (1499 – 1502), the Palace of the Captain of the Citizens, the Palace of the Popes, this hosting the Archeological National Museum, and elegant ancient houses.
Absolutely not to be missed is the impressive Saint Patrick’s Well, an amazing Late Renaissance masterpiece of hydraulic engineering.
On any fourth Sunday of the Month the streets of the town centre are the setting of Crafts’ Fair, where you can see and purchase hand-made items, pottery, glass, textiles, wooden items, paintings, natural products. 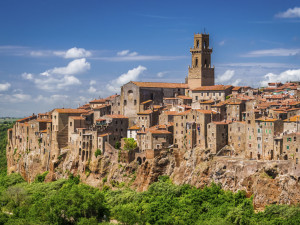 Pitigliano
Pitigliano lies on a tuff cliff along the Strada Regionale 47 Maremmana.
Known since the Middle Ages for the presence of a large community of Jews, so that it was called “The Small Jerusalem”, it conserves a Synagogue dating back to the 16th Century and the Jewish Cemetery as proofs of its religious variety.
In the neighbourhood of Pitigliano there is a number of Etruscan necropolises. Near the necropolis of Gradone, close to the Jewish Cemetery, a new learning centre was created. Such a centre is divided in two sections: the “Town of Alive People” and the “Town of Dead people”. The “Town of Alive People” contains reconstructions of houses and rooms dating back to the Bronze Age and the Etruscan Age. Through Vie Cave, a system of streets built by the Etruscans, you can get down to the section “Town of Dead people”, where you can visit the burying area with one-, two- or three- room tombs. Here you can visit the “demo” tomb, where the burial of Larth and Velia, a fictitious couple of dead spouses, has been arranged, allowing you to experience the sacredness and the feelings of an Etruscan funeral. A further going down leads you into Saint John’s Necropolis, conserving tombs dating back to from 6th century to the early 3rd century BC.
Inside the Monumental Tomb with a couple of pillars aside you can see panels with the images of the theatre plays performed during the summer. 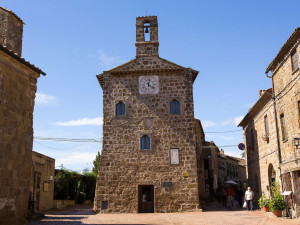 Sovana
Still in the province of Grosseto there is Sovana, a suburb of Sorano, a rare jewel of Medieval urban centre.
Founded by the Etruscans and conquered by the Romans, during the Middle Ages it was a feud run by the family of Aldobrandeschi and then became a free Municipality. During the Middle Ages the plagues reduced the population of the town so much that it was called “Jeremiah’s town”, the Dying Town. The attempts by Lorenas to repopulate the town, which took place since the 16th century, turned out to be useless, which helped to maintain intact the Medieval appearance of Sovana up to nowadays.
Worthy of note is the Archaeological Site of Sovana on the road heading to San Martino sul Fiora.
Linked to the Archaeological Site of Pitigliano by the already mentioned Vie Cave and being part of the area “Archaeological Park of the Tuff”, the site hosts a number of Monumental Tombs dating back to the Etruscan Age.
Particularly worthy of a visit is Tomba Ildebranda. 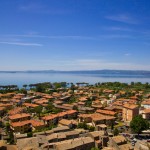 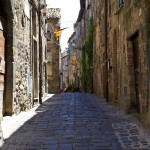 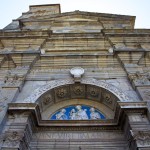 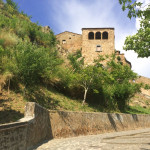 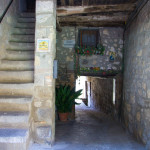 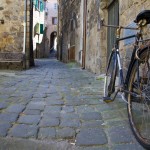 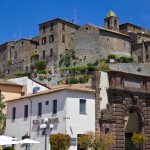 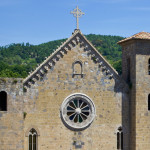 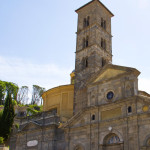 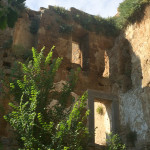 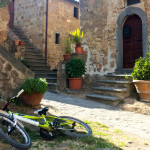 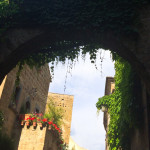