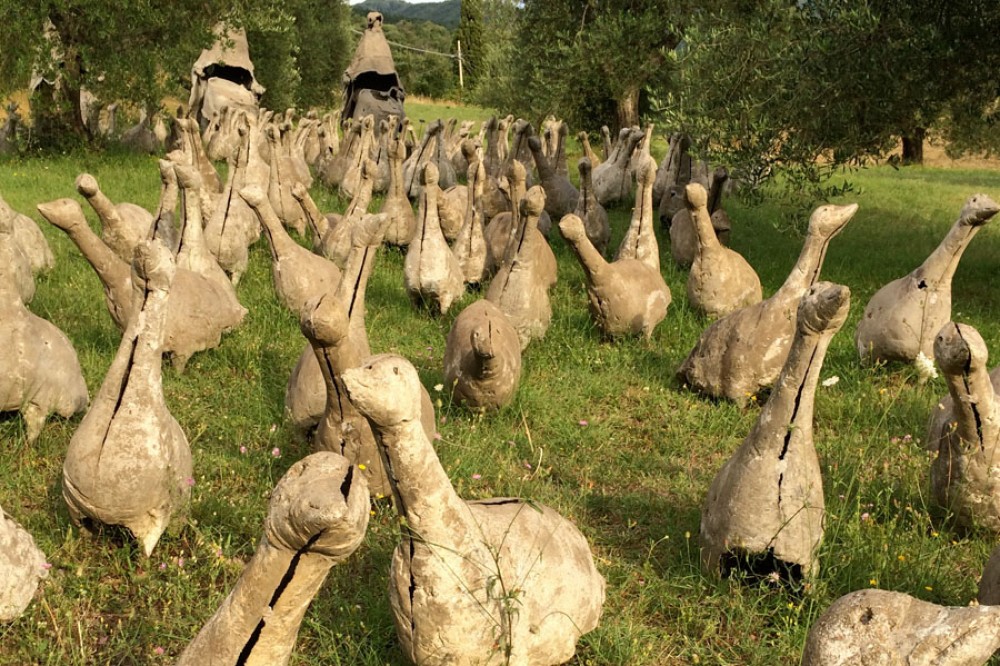 Being popular destinations for holiday for wealthy people, Bolsena Lake and the surrounding area of Tuscia are rich in elegant Villas surrounded by pleasant Gardens. 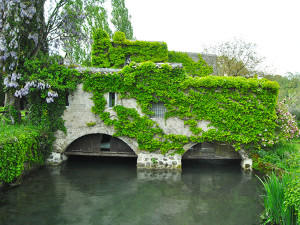 Cannara Garden
Located on the shores of Marta, an emissary of Bolsena Lake, this stunning Garden is named after a building dating back to the Romans and lying above the creek, a sort of bridge-house containing a grid system (originally made of canes, after which Cannara is named) allowing the capture of eels. The Garden is home to a large variety of flowers, such as roses, peonies, irises, violets, poppies, callas and a huge lotus. 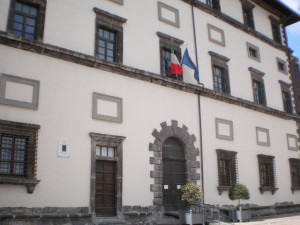 Palazzo Farnese
From Bolsena you can easily reach Caprarola where lies the amazing Palazzo Farnese, which dates back to the 16th century. Originally conceived as a military fortress by Antonio da Sangallo, it was restored and turned into the elegant summer house of Cardinal Alessandro Farnese by Architect Vignola. It is him who built the two front staircases, thus breaking the isolation of the ancient fortress from the town centre of Caprarola. Inside the building the original austerity was replaced by the luxury of the frescoes of the several rooms of the building, made by talented artists of that time, such as Zuccari Brothers, Jacopo Zanguidi better known as “Bertoja”, Raffaellino da Reggio, Antonio Tempesta and other minor artists. On the rear of the building you can visit the Italian Gardens, precisely designed according to the 16th century style. On the top of the Gardens there is the hidden House of Pleasure, built right after the construction of Palazzo Farnese and once summer house of the former President of the Republic Luigi Einaudi. 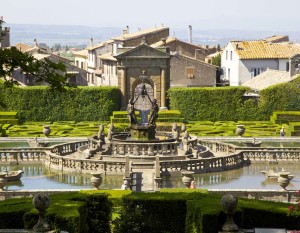 Villa Lante della Rovere
Heading back towards Viterbo, you can take a visit to Villa Lante della Rovere, another example of late 16th century Mannerist architecture arguably built by Vignola. The visitor who has already visited Palazzo Farnese in Caprarola is going to be struck by the difference between the two Houses: Villa Lante indeed is not a majestic fortress turned into summer house, but is composed of two detached Houses, built by two cardinals after whom the two Houses are named. Having been built by two different people, the two Houses show different styles of frescoes: the landscapes in Casino Gambara contrast with the Classical stylish frescoes of Casino Montalto. The main attraction of Villa Lante della Rovere are the Gardens, consisting in a wide green area composed of monumental fountains, artificial creeks, tailored bushes, statues of Water Gods, oaks, holm oaks and plane trees. 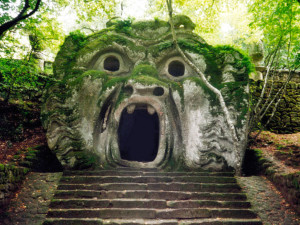 The Park of the Monsters in Bomarzo
At Bomarzo not far from Villa Lante lies the Park of the Monsters or Holy Wood, a grotesque Monumental Garden. The Park was built in 1547 by Architect Pirro Ligorio on the will of Vicino Orsini and is a peculiar example of Late Renaissance Garden, different from the already mentioned Italian Gardens of Palazzo Farnese and the Mannerist Gardens of Villa Lante della Rovere. The Park is indeed made of sculptures portraying mythological characters and extravagant architectures, such as the Leaning House and the Orcus. It is hard to identify a single interpretation able to work as a Leitmotiv linking all the artworks of the Park: after several attempts carried out by scholars and philologists to find out a paradigm of interpretation, it is likely that Vicino Orsini had on purpose inserted in the artworks of the Park a large variety of erudite quotes, ranging from Medieval and Renaissance Literature to mythology, astronomy and esoterism, along the lines of the multiplicity of styles typical of Mannerist Architecture. 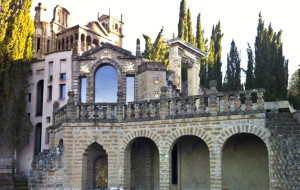 La Scarzuola
At Montegiove, a village in the Municipality of Montegabbione (TR) lies the Ideal Town by Tommaso Buzzi. The Monumental Park was built between 1958 and 1978 and was conceived as a backcloth, intentionally left unfinished. The buildings recall several previous buildings, known for being really spectacular: Villa Adriana and Villa d’Este in Tivoli, Rometta by Pirro Ligorio, Acropolis in Athens and the already described Park of the Monsters in Bomarzo. The style of the complex is definitely the Neo-Mannerism, amplified by the staircases connecting the parts of the complex, the stretching of the monuments, the intentional disproportion of the parts, the maze-like structure, the geometrical shapes, the astronomical quotes and the implementation of unaccomplished architectural plans by Borromini and other Mannerist and Baroque Architects. 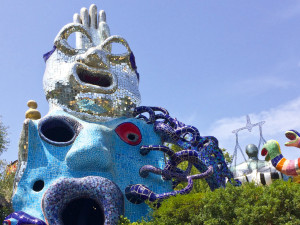 The Tarot Garden
Another Monumental Park in the neighbourhood of Bolsena Lake is the Tarot Garden. Located in Pescia Fiorentina in the Municipality of Capalbio (GR), it was created by Niki de Saint-Phalle, a French-Us artist, in 1979 and is composed of 22 statues recalling the main Tarot Cards. The statues of the Tarots go along with the visitor on an itinerary conceived by Niki as a spiritual and magical trip, a sort of initiation recalling previous masterpieces (the Park of the Monsters in Bomarzo, the Ideal Palace by Ferdinand Cheval, the Park Guell in Barcellona, the Watt Towers by Simon Rodia in Los Angeles). 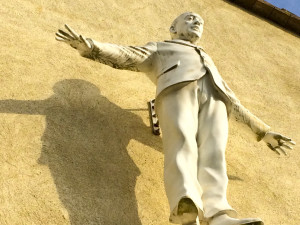 Giardino di Spoerri
Another Monumental Park easily reachable from the Lake is Giardino di Spoerri in the Municipality of Seggiano (Gr). It can be visited from Easter to October and contains 103 masterpieces by 50 different artists: the path develops among fields and small woods in the 16 hectare wide Park, following an only apparently random rhythm. The Modern artworks are arranged in a totally random way so as to disguise with the landscape. In addition to the sculptures there is also a botanic path. Furthermore, for any artist exposing in the Park there is an olive tree typically growing in this area and known as “olivastra seggianese”. 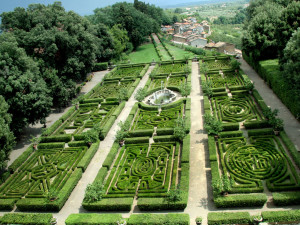 Castello Ruspoli
At Vignanello, in the neighbourhood of Bomarzo, lies Castello Ruspoli, a refined example of Renaissance castle. It owes its appearance to the renewal of the preexisting Medieval Castle between 1531 and 1548 upon the will of Beatrice Farnese and her son-in-law Sforza Marescotti, presumably on a project by Antonio da Sangallo. Its huge bulk, surrounded by a deep trench, tightened by four corner bastions and featuring Ghibelline battlements, dominates the landscape of the village. At the beginning of the 17th century Giulia Orsini, daughter to Vicino Orsini, took the decision to build the Gardens stretching on the hill east of the Castle, creating an articulated structure with different sections. Among these the Garden of Vegetables is definitely the most interesting and best preserved part of the entire complex. Bushes of Laurel, Prunus Laurocerasus, Viburnum, Viburnum Tinus and Buxus sempervirens grow on its perimeter, while short hedges of Buxus Sempervirens draw geometrical shapes within. 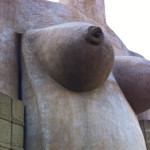 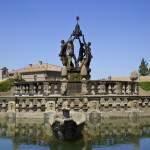 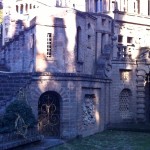 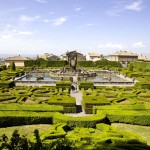 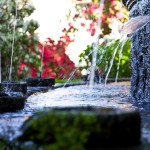 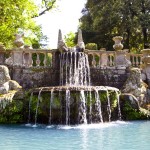 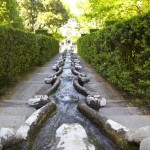 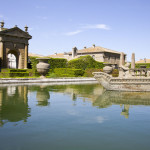 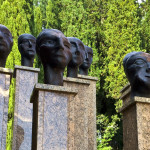 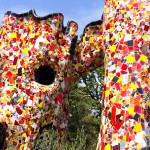